NICE guidelines recommend the use of Rituximab, a chimeric monoclonal antibody directed against CD20 antigen expressed by B cells in patients who have had an inadequate response to tumour necrosis factor alpha (TNF) inhibitors. Tocilizumab is a humanised monoclonal antibody that inhibits IL6 receptor signalling. IL6 expression is increased in the synovial tissue of RA patients and induction of arthritis in mice models (2,3). 50% of patients who had an inadequate response to TNF inhibitors achieved an ACR20 response with the administration of Tocilizumab (4) and the drug has recently been included in the NICE treatment algorithm for use after anti-TNF or Rituximab failure.

The current evidence on the efficacy of Rituximab relates primarily to seropositive patients, supported by a recent meta-analysis (5) and consensus statement (6). Even within this population, however, clinical responses are heterogeneous. Recent synovial-based studies suggest that the heterogeneous clinical response may in part be explained by variable B cell depletion within the synovial tissue rather than simply in the peripheral blood (7-9).

An explanation of the variation in response is also emerging from our MRC-funded Pathobiology of Early Arthritis Cohort (PEAC) initiative (220 recruited, target 300 by April 2012 - PEAC (MRC) Public Information Website . We have shown that RA patients can be classified into at least 3 histo-morphological patterns e.g. Fibroblast (pauci-immune), Lymphoid (B cell rich) and Myeloid (rich in monocytes but poor in B cells). Additionally, a pilot biopsy-based study in patients who are inadequate responders to Anti-TNF therapy (anti-TNF-ir) showed that a significantly higher proportion of patients with synovial B cell-rich pattern respond to Rituximab compared with a synovial B cells-poor pattern and vice versa no-response is associated with absence/scarce B cells.

Our group has also previously suggested that one mechanism for treatment resistance in Rituximab may be the survival of self-sustaining, B cell niches within the synovium (10). Recent histological data has demonstrated a correlation of clinical response at 16 weeks following Rituximab and levels of synovial membrane B-cell depletion. (11). A growing body of evidence, therefore, would suggest that a more rational approach to Rituximab therapy and a stratified approach to patients may be required. We support the notion that a more tailored approach is required in order to improve efficacy and outcome, which forms the basis of this trial. 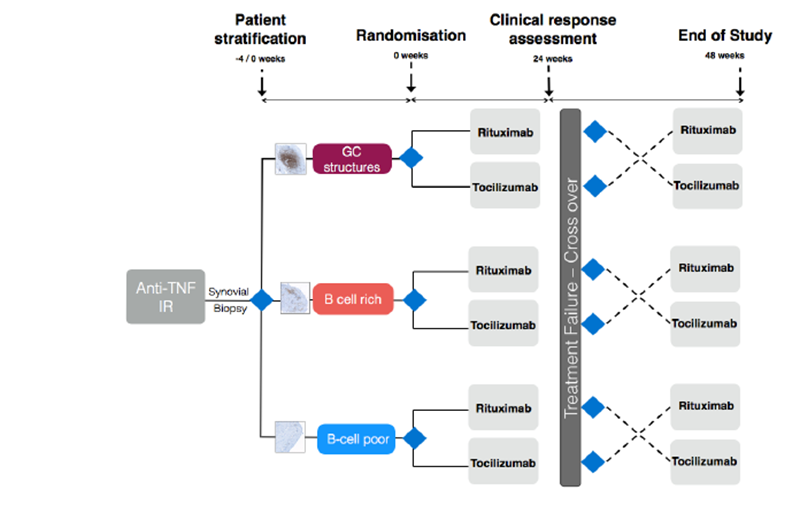